A downloadable game for Windows

Take control of a college football program and lead the team to victory! Old School Football Coach gives you the true college football coach experience. Set your strategy, pick your plays, and watch the action unfold in front of you. Get ready for full game simulations with complex AI behaviors, presented in a retro 2d style.

Want to build a team from the ground up? Old School Football Coach has a career mode that allows you to grow your team year-after-year on your quest to become the next college football dynasty. Set depth charts, recruit new players, and design new plays on your road to be the #1 team in the nation!

Most controls can be configured in the Settings menu. Defaults are:

Old School Football Coach is very playable in it's current state, but is also still under development! Updates and improvements to come!

In order to download this game you must purchase it at or above the minimum price of $9.99 USD. You will get access to the following files:

Will there ever be ANY gameplay video, or just the 2 minute trailer? I had this request before, but haven't seen any gameplay video yet.

This is definitely on the backlog.  Thanks for being patient! The game is still actively being worked on and I'm just a one man team, so it's always a tradeoff between adding new features versus spending time on new marketing material. My last couple of updates have introduced new things to the game, causing some videos I had started to quickly became out of date. Anyways, as mentioned, I hope to get to it soon! Community contributions are also very welcome.

This game is fun but there is an annoying bug I keep encountering. Sometimes after you choose a play on defense, the opponent's offense just won't load. Thankfully you can fix this by going to the 'Change Game Scenario' menu and just pressing OK, but it's irritating to do that a dozen times a game. Other than that, this is a really good game.

Yikes, I'll see if I can figure out why that might be happening. Thanks for the report. If you don't mind giving a few more details,  were you playing against one of the default teams or against a custom created one? If default, do you remember which team it was?

No problem! It's against custom created ones, doesn't happen all the time but at least a few times each quarter.

Ok, after some investigation I was able to find a nasty bug that was introduced in build 21-10 that might have been indirectly causing the issue you were seeing. I uploaded a new version with a bug fix in place (OldSchoolFootballCoach_Win64_2110_1.zip). Feel free to give it a try and see if it fixes your problem! This build should be totally backwards compatible with your saves from 21-10. You can migrate those saves to the new version by copying over the "Data" folder.

The bug I found was that when you select a team and play a game, any football play not in your team's playbook would disappear from the game. This means that plays that should have been available to the other team were no longer there. Closing the game and reloading it would bring the plays back in most cases, but that would only be a temporary work around. But to make matters worse, if you created a custom play in the play designer and saved it, missing plays could disappear for good. Thanks for helping me spot this problem.

I think this might have been the root cause of the issue you were seeing. I'm speculating that you were trying to play against a team with a very different playbook than your team, and so a lot of their plays would become unavailable due to the above bug. The other team's coach might have therefore been trying to call plays that didn't exist anymore and gotten stuck not knowing how to proceed. Also, if you had generated custom teams after plays had already disappeared then the new teams might have ended up with a pretty small playbook to begin with.

Hopefully all of that made sense. Feel free to let me know if this latest build doesn't fix your problem. I'll take another stab at it if needed. Thanks again.

Thanks for working on this so fast, and I'm pretty sure I got what you were saying about what's causing the bug. I'll check it out a little later today and let you know if it's fixed! Again, thanks for getting this build out so quickly.

Okay I played a few games in my save and it seems you did the trick, I don't think I encountered the bug once. I'll let you know if it shows up again!

Would love to have some long gameplay videos from people who bought it, or from the developer himself.

Just purchased the game, and it started off in a super small window, playing on a laptop. So I changed the resolution to make the gameplay box larger, but the font/game itself didn't scale up? So it's like impossibly small and barely able to be seen without a magnifying glass and essentially unplayable. Not sure if I'm making a mistake or what, so I thought I'd reach out to the source.

Thanks for purchasing the game and supporting my development! It seems I'm not handing high resolution displays very well.  I could maybe solve this by giving the ability to adjust the size of UI elements in the game options. Though, I'll have to think about how to handle the combination of  large UI elements on a small resolution. In that case I might wind up buttons, dialogs, and other widgets not fitting on the screen properly. I'll see what I can come up with for an upcoming build. Thanks for reporting this issue!

Update: Do you mind sharing what resolution you are playing the game at? The latest build of the game (21-06) has a UI Scaling option which can make all of the UI elements in the game 1.5x or 2x bigger. Adjusting the UI scale might be enough to solve your issue. If interested, you can read the latest development log for more details. If this doesn't work for you, for example if your resolution is too low to use the UI scale option effectively, feel free to let me know and I can look into other ways to solve this.

Why my game crashed when i tries to make a 20 conference League?

I'm not sure, but I'll look into it as soon as I can. Thanks for the report. Do you remember the other options you set when trying to make the league? For example, how many teams did you select to create? I might have a testing gap with certain combinations of options. I'll look into it.

I do want to caution against creating a large number of teams to fill 20 conferences, though. At this stage in the game's early access development you might run into large wait times in not only creating all of those teams, but it will also take a while to simulate games between all of those teams each week in career mode. I've been making a lot of optimizations in these areas lately, but more complex optimization techniques are going to be needed to support 20+ conferences with 100+ teams with reasonable wait times. The default league that ships with the game has around 50 teams, which is close to what I think is the current sweet spot depending on the specs of your computer.

Update: A new build of the game (21-05) has been uploaded. Feel free to check it out and see if your issue has been fixed. Among other things, this build fixes some bugs and improves error handling around new league and team creation. Check out my latest Development Log for more details if interested. Thanks again for reporting this issue!

Are there any gameplay videos of this game? I couldn't seem to find any online without which I have no idea how polished this game is.

A video has now been created and added to this page! Best viewed in full screen mode. Hopefully it gives a better sense for the current state of the game. 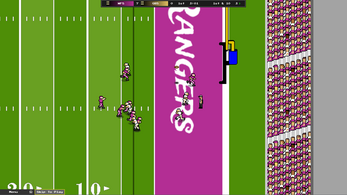 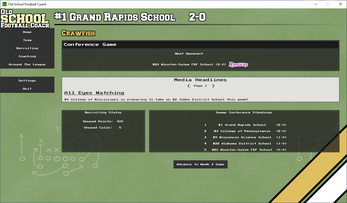 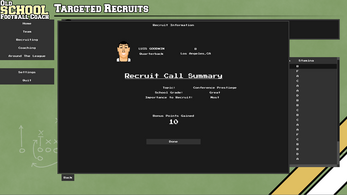 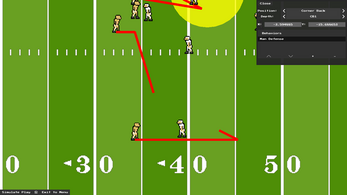 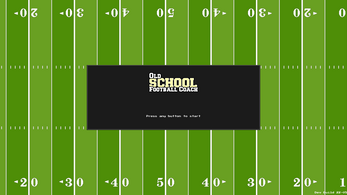